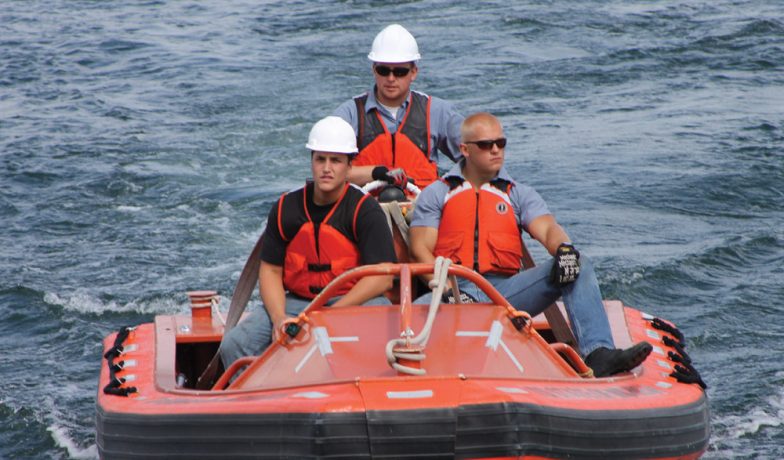 By SeawayReview  |  January 9, 2023 People, Workforce Development
Employee recruitment and retention are challenges confronting almost every business and industrial sector. The maritime industry is no exception. Attracting new talent – from deckhands to captains – and keeping those valuable employees are high priorities for Great Lakes operators and, similarly, those across the U.S. inland waterways system.

In Canada, maritime workforce is getting high-profile attention. The Canadian Marine Careers Foundation (CMCF), formerly known as the Canadian Marine Industry Foundation, was established in 2020 to take on expanded efforts to attract maritime workers and, more importantly, to approach the effort in new ways, to diverge from past practices judged as no longer productive. “Approximately 43% of the Canadian marine transportation workforce is expected to retire over the next 10 years,” said Julia Fields, executive director of the Canadian Marine Careers Foundation (CMCF). “Retirement rates for key marine occupations are estimated to be higher, with 52% of engineering officers and 47% of deck officers expected to retire in the next 10 years.”

In November, the foundation changed its name to CMCF in an effort to reflect the organization’s overall mission to promote the diversity of careers within Canada’s marine sector. Replacing the word “industry” with “careers” widens recognition of the foundation’s focus on the commercial marine sector and marine career opportunities within the public sector. CMCF brings together private sector employers, unions and educational institutions, as well as public sector partners with maritime responsibilities, to jointly promote careers in Canada’s marine sector. Fields said the foundation is an opportunity for members to “pool our resources, collaborate on creative, engaging awareness initiatives and raise our collective voice across the country.”

In 2020, Transport Canada projected that approximately 19,000 new maritime workers will be needed over the next 10 years. In 2020, there were approximately 1,200 vacant positions on Canadian commercial vessels and ferries; of that total, 740 vacancies were in the Great Lakes – St. Lawrence region. Vacancies were highest for critical positions, such as deck and engineering officers. “In recent years, (employee) shortages have led to Canadian vessels being pulled out of service, resulting in real economic losses,” Fields said. Transport Canada estimated that approximately 33% of the marine workforce is 55 or older, higher than the Canadian average of 22%.

For workforce development, the survey showed promising directions. Young people, for example, think highly of the maritime industry, that it aligns with their own values. About 20% of respondents have considered a maritime career and are open to next steps. A large majority called the work interesting and fulfilling and say it presents “lots of opportunities.” Pay is not the only issue: flexibility and work-life balance are important. One large barrier is that many people don’t know about the wide choice of maritime career possibilities; 40% of respondents said they had “never heard anything about it.”

Fields said new work is starting across a number of fronts. Federal policies are one important focus. She noted, for example, that the marine sector receives limited government funding for workforce, a status that contrasts with richer benefit programs for other industries, programs established decades ago but that did not include maritime.

Additionally, she said that many seafaring jobs are not eligible under Employment and Social Development Canada (ESDC) employment programs, including tuition grants, for example, or Employment Insurance benefits.

“It would require simple policy amendments,” Fields commented, “to include federally regulated employment to encourage more Canadians to join the ranks of the marine industry by allowing them to receive federal support during training.” 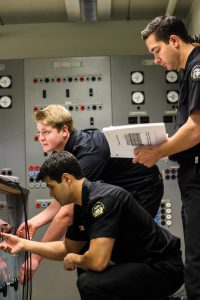 In the United States, the Bureau of Labor Statistics projects 8,700 annual openings for water transportation workers (not just Great Lakes), on average, from 2021 to 2031. That actually represents little or no employment increase. Rather, most openings are expected because of workers transferring to different occupations or retiring.

GLMA seeks to enroll 60 cadets each year; total enrollment is around 240. Rear Admiral Gerald Achenbach, superintendent of GLMA, estimates that about 60% of students are from Great Lakes states. There’s no requirement for post-graduate reporting, so Achenbach said he does not know how many students, after graduating, stay and work within the Great Lakes.

Workforce development is a “very large concern” across the maritime industry, Achenbach commented, adding that academy enrollment remains steady. However, applications are down, particularly for the engineering officer program. Retention, though, is high. More than 80% of the students graduate.

Achenbach said that maritime recruitment, among all sectors, needs to expand beyond familiar groups whose members already have an inherent interest in maritime service. “How do you talk to somebody from Wichita or Oklahoma City?” he asked rhetorically. “How do you get beyond that comfort factor? It’s a challenge.”

Achenbach said the academy is active on diversity issues, e.g., through affiliations with military bases. The academy supports Women on the Water programs and outreach; it works with the Women’s International Shipping and Trading Association (WISTA) to advance and expand awareness of opportunities for women.

Judy Druskovich is the admissions specialist at GLMA. She views the recent drop in applications as within historical variations. She referenced SASH – sexual assault/sexual harassment – directly, noting that SASH, a challenge in many workplaces, can be magnified within maritime discussions. She said that women interested in maritime careers know about it, and they are glad it is being addressed. “It has not come up as a barrier to entry. When people are interested, and these are strong individuals, this will not deter them,” she added.

Druskovich said there is no single solution workforce development solution. She said, however, that companies are working to make the industry more “human friendly.” She cited shorter work hitches, varying now from two days to 60 days, at least on the Great Lakes. Shipboard connectivity is a big issue, she said, and one changing for the better. Starlink, for example, has a separate tab for maritime applications. “This is what people want,” Druskovich added. “They want the job to make them feel less isolated.”

Eric Peace, vice president of the Lake Carriers Association (LCA) referred to workplace challenges as not a new issue, but one made worse by COVID-19. “Companies have lost employees,” he said. “We are an aging community; there’s not a lot of youth.”

Individual companies are more active on workforce development than the association itself, Peace explained, but the association is active on a number of issues. One issue is credentialing – working with the Coast Guard on quicker procedures. Peace pointed out that the Coast Guard itself is short staffed, which slows official reviews for applicants’ exams and paperwork. The concern, Peace said, is that applicants today, particularly when jobs are plentiful, don’t want to wait 90 days for the Coast Guard’s official review; they can move to the next job offer and a pay day that will arrive long before the three-month decision time is up.

LCA is focusing on the U.S. Maritime Administration’s Military to Mariner program, designed to help veterans capitalize on their experience and get fast-tracked to a role in the U.S. Merchant Marine. Peace, who is retired from the Coast Guard, spoke highly of the M-to-M program. Another external effort, at least for Peace, is working with a maritime high school in Cleveland, trying to get kids interested in maritime occupations.

Peace noted that the government itself is a competitor. The Great Lakes Pilot Association, for example, draws captains from private industry. The money’s hard to resist: In April, the Coast Guard set the 2022 yearly compensation for pilots on the Great Lakes at $399,266 per pilot.

Regarding diversity, Peace said LCA supports WISTA. He said the industry is working to accommodate the more varied demands that arise when employment pools expand. He said the carriers are on board with MARAD’s anti-harassment EMBARC program (“Every Mariner Builds a Respectful Culture”).

The Women Offshore Foundation, also known as Women Offshore​, is a U.S.-based online non-profit organization and resource center established in 2017 to support a diverse maritime workforce. Its mission “is to propel women into meaningful careers through access to a worldwide community and professional development resources, while raising awareness amongst industry leaders and decision makers about issues affecting women on the water.” Supporters include Chevron, Maersk and Crowley.

Cassi Laskowski, executive director of Women Offshore, touched on a common concern regarding recruitment. “We think it is very important to showcase women working in the maritime industry,” she said. “How can a young girl dream of a job on the water if she doesn’t know that it is even a possibility for her?”

Laskowski also noted the need to go beyond traditional employment markets. “I have learned over the years that if someone doesn’t know a family member or friend in the maritime industry, they most likely are completely unaware of the industry as a whole and its opportunities,” she added.

But challenges remain. Laskowski wants diversity efforts measured as a business performance topic, not just a “check the box” review. Policies towards women need to show inclusion. She asked, for example, whether a company has a robust maternity policy, whether managers have fully considered how a nursing mother might return to sea. She wondered whether evaluations still retain a built-in bias.

Laskowski said that Women Offshore has started to see a shift among U.S. companies. “While some are slow to change, others are blazing a trail for others to follow. We appreciate companies doing the hard work to look internally as to why they are having a difficult time retaining women and minorities,” she said.

She urged Great Lakes carriers “to dig deep into their policies and procedures to ensure they are fostering an inclusive environment for all.”

Kallenberg’s thesis is that hiring and retention are interrelated, difficult to resolve singularly. He advises employers to step back and develop a workforce strategy encompassing a number of topics, from training and compensation to “organizational justice” to accurate and realistic job descriptions and “appropriate onboarding.” Each topic impacts the other, for better or worse, he said. Career growth requires deliberate management focus, Kallenberg argues. Employees need to see a career pathway, and employers need to help people progress, e.g., with financial or other benefits, such as flexible schedules.

Kallenberg comments that the “maritime industry is slow to adopt change.” He writes that in companies where managers have “hawse-piped” their way up the ladder that hands-on experience may not necessarily prove helpful for dealing with today’s personnel issues and turnover. Challenges in 2022 require new thinking from people ready to take chances on new directions, he said. 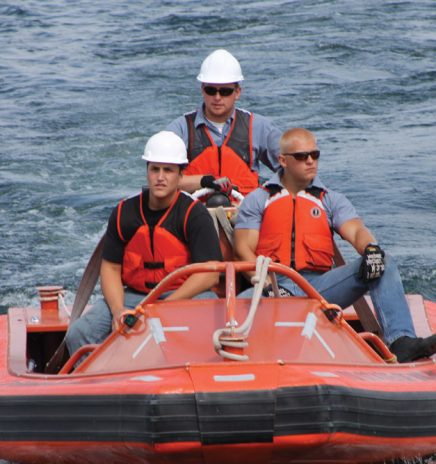 Employee recruitment and retention are challenges confronting almost every business and industrial sector. The maritime industry is no exception. Attracting new talent – from deckhands to captains – and keeping... Read More 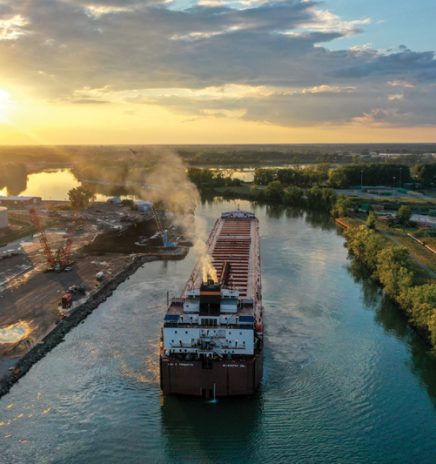