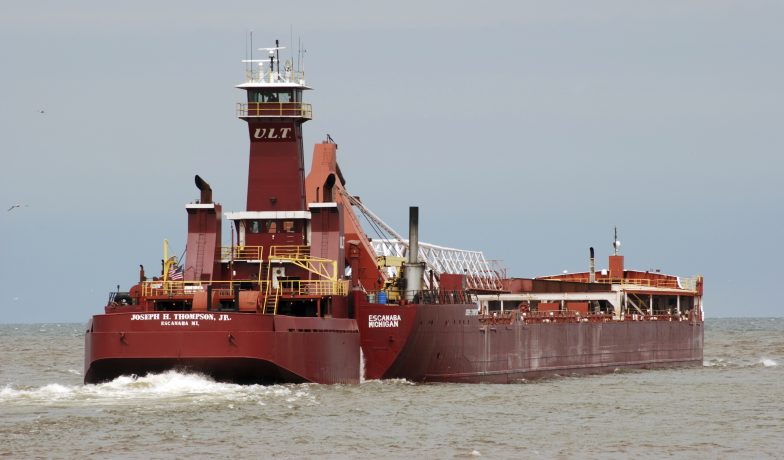 The “tug-barge experiment” began on the Great Lakes in the early 1950s with the Integrated Tug-Barge (ITB) unit Carport / G1, a tug and barge rigidly connected together, operating as if they were a single vessel. In 1967, a new development followed along the path of a traditional river tug-barge, when the bulk carrier Horace S. Wilkinson, renamed Wiltranco I, was converted into a barge. The experiment did not operate as well as hoped, and the Wiltranco I was laid up. In 1973, Litton Great Lakes took another attempt at the ITB with the Presque Isle / Presque Isle, but the attempt at fitting through the U.S. Coast Guard crewing requirements loophole failed when the tug was declared unseaworthy when not notched with the barge. The story of the conversion of the Thompson began in 1979 when Upper Lakes Towing, a venture of VanEnkevort Tug & Barge founder Clyde VanEnkevort, purchased the old laid-up crane ship Buckeye and converted her into a barge to operate in the stone trades. The operation worked well, but like all vessels, the Buckeye reached age of retirement. Upper Lakes sought a replacement vessel, finding the large Joseph H. Thompson for a bargain. They purchased the Thompson in late 1984 and towed her up to Menominee, Michigan, in early 1985 to undergo a dramatic transformation.

The Thompson already had a colorful history to this point, being constructed in 1944 by Sun Shipbuilding & Dry Dock of Chester, Pennsylvania, as the C4-S-B2 cargo vessel Marine Robin for the Maritime Commission for the war effort. She even participated in the invasion of Southern Italy during the war. In 1950, Marine Robin was sold to Sand Products Corp. to eventually be rebuilt as a Great Lakes freighter, with ownership being transferred to Hansand Steamship, a 50/50 partnership between Sand Products Corp. and Hanna Mining, the next year and the vessel was taken to Maryland Dry Dock in Baltimore to be rebuilt. Her old forebody was cut off, and new bow and midbody sections were built by Ingalls Shipbuilding. The midbody was taken to Baltimore and fitted onto the stern of the Robin, and the hull sections were towed the Mississippi River and Illinois Waterways to South Chicago. There they were connected and the deckhouses assembled. She entered service on November 4, 1952, as the Joseph H. Thompson, then the largest cargo vessel in the world. Following a relatively short career in the ore trade, the Thompson was laid up at Detroit, Michigan, in late 1982 following the steel market crash.

Flash back to 1985, work began on rebuilding the Thompson into an articulated tug-barge. Her forward and aft cabins were removed from the vessel, and 100 feet of the ship was cut down by one deck. Meanwhile, hopper sections were installed in the cargo hold to direct flow of cargo to two conveyor belts running the length of the vessel, one on either side of her centerline. The belts and slopes were all constructed over the old cargo hold tank top. The hold belts lead to a hopper in the stern of the vessel to fill a custom bucket elevator that feeds a 250-foot deck boom.

The bucket elevator onboard the Thompson is especially interesting, as it utilizes the chain track from an old Caterpillar bulldozer with buckets welded onto each link.

Joseph H. Thompson’s unloading system is entirely hydraulically-operated. A used GM diesel locomotive engine was installed onboard during the conversion to power the generators and Hydraulic Power Units (HPU) onboard.

After the tug’s hull was complete, her superstructure was fabricated, complete with an elevated upper pilothouse to see over her barge.

Power was originally supplied to the tug by three General Electric 7FDM16 diesel locomotive engines. The notch of the Thompson was strengthened and plated over, complete with the pin rack for a Hydraconn ATB connector system, pioneered by VanEnkevort. The connector pins were installed onboard the tug to connect with the barge. The Hydraconn connector works similarly to the Interconn and Artubar systems, utilizing a single hydraulic ram on each side of the tug to lock a toothed head into a pin rack on the sides of the barge’s notch. The system allows the tug and barge to move independently of each other in terms of pitch, but operate together as a connected tug-barge unit.

The duo entered service in September 1990 after an over five-year long conversion project. The Thompson Jr. was repowered in 2007 with a pair of new MaK diesels. In 2015, the duo was acquired by VanEnkevort Tug & Barge, and in 2019, The Joseph H. Thompson was married with the newly-acquired tug Laura L. VanEnkevort, making her more maneuverable and the pair shorter in order to access harder-to-reach docks. The Joseph H. Thompson Jr. was rebuilt to push VanEnkevort’s newest barge, Michigan Trader, operating on the Great Lakes today.

The conversion of the Joseph H. Thompson was a unique project, and set the stage to prove operators could profit off of converting old, outdated steamers into ATBs.

Brendan Falkowski is the owner and editor of Shipwatcher News (www.shipwatcher-news.com), a bimonthly newsletter about Great Lakes shipping news. Brendan is a high school senior from Bath, MI, and will be attending University of Michigan this fall to pursue a degree in naval architecture & marine engineering and join the Great Lakes shipping industry. 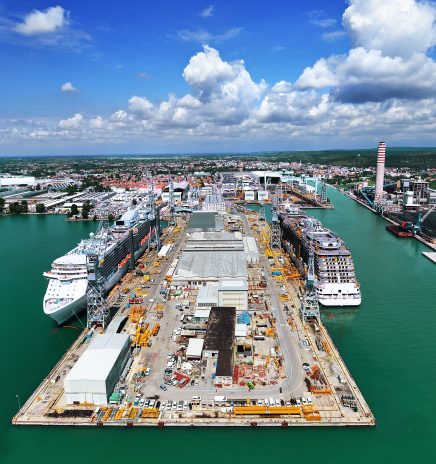 RINA and Fincantieri Join Forces in Research and Development

Fincantieri, one of the world’s largest shipbuilding groups, and RINA, an Italian inspection, certification and consulting engineering company, have signed a memorandum of understanding to develop synergies in the field... Read More 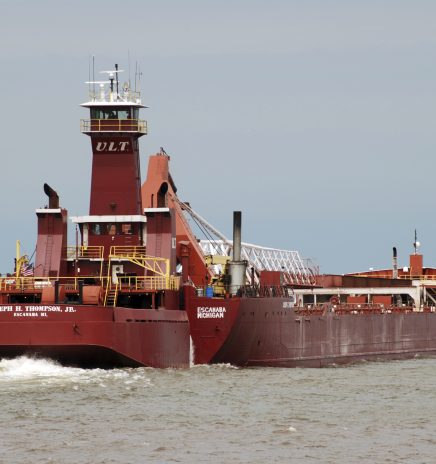