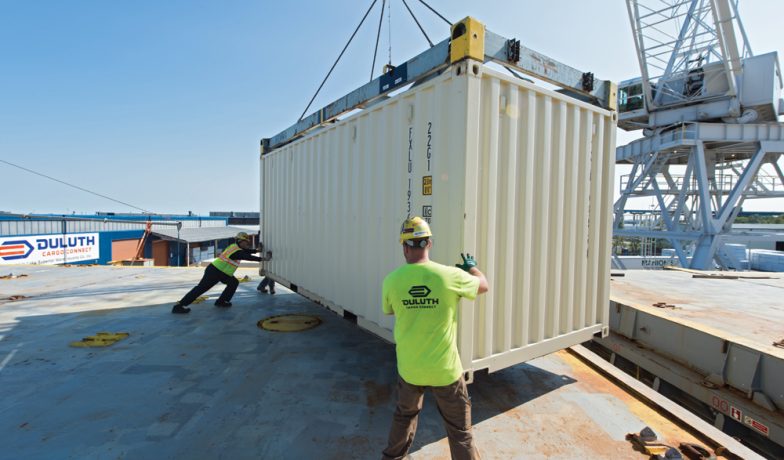 By Frank McCormack  |  December 1, 2022 Cargo & Commodities, Ports & Terminals
Historically, seaports have dominated the container scene, with boxes moved in and out of coastal ports on containerships and distributed inland by truck or rail.

For the region surrounding the Great Lakes-St. Lawrence Seaway, that paradigm largely holds true. For the northeastern United States, the largest container port is the Port of New York and New Jersey. On the Canadian side of the Seaway, container-handling ports are clustered on or near the Atlantic, with the exception of Montreal.

Several ports on the U.S. side of the system—the ports of Cleveland; Monroe, Michigan; and Duluth-Superior—are seeking to change that paradigm and demonstrate the feasibility of container transport well inland on the Great Lakes-St. Lawrence Seaway.

Of these three, the Port of Cleveland has the most well-established container business, which dates to 2014. Historically, bulk and general cargoes have dominated at Cleveland, which handles between 12 million and 15 million tons of cargo annually. Cargos moving through the Port of Cleveland include iron ore, import steel, salt, stone, asphalt and, beginning next year, bulk liquid cargo. Dave Gutheil, chief commercial officer at the Port of Cleveland, said, when the port launched its container service eight years was the major motivation.

“Really, our whole goal when we started it was to diversify our cargo base here at the port,” Gutheil said. “This was another piece of the puzzle or another arrow in the quiver, just to bring more cargo and different types of cargo to our operation that hadn’t been here before.”

Called the Cleveland Europe Express, the thrice-monthly service, in partnership with Amsterdam-based shipper Spliethoff, connects the Port of Cleveland and the Port of Antwerp, Belgium. Spliethoff’s Peyton Lynn C., an 860 TEU capacity vessel, is dedicated to the service, which remains the only direct service between the Great Lakes and Europe.

“That vessel is supported by two or three other vessels on a monthly basis that are carrying containerized and non-containerized cargo,” Gutheil said.

The service will move upwards of 10,000 TEUs this year, and the port has the capacity to handle up to 50,000 TEUs. Containers are moved through a combination of mobile harbor cranes and reach stackers. Demand is there for increased container movements, Gutheil said, and Spliethoff is exploring the possibility of adding another dedicated containership to the route.

Paul LaMarre III, director of the Port of Monroe, praised Cleveland for stepping out for the whole system.

“I really do give Will Friedman (the port’s president and CEO), Dave Gutheil, and the Port of Cleveland the utmost credit and recognition for taking a risk on behalf of the system that is allowing all of us to take, as ports, a much harder look at what is the most commonly used form of freight movement in the world, but the most underutilized on the Great Lakes-St. Lawrence Seaway system,” LaMarre said. “They were the vanguard with Spliethoff.”

Launching a container service at the Port of Monroe, located on Lake Erie to the west of Cleveland, has been quite a challenge, LaMarre said. LaMarre, who came to the Port of Monroe in 2012, said his port has actually been looking at waterborne container movements since 2014, the same year Cleveland started its service. The original idea was to load 100 Ford Mustangs into shipping containers—four per box—for export and to import car parts. Partners in that 2016 pilot program were Green Shipping Line, Spliethoff and Ford, among others.

That pilot program, though, was drastically scaled down and moved elsewhere when U.S. Customs and Border Protection (CBP) would not guarantee that an agent would be on site to inspect the containers. Unfortunately, that’s not the only time a plan to move containerized or crated cargoes through the Port of Monroe has been undermined by cumbersome policy or lack of necessary inspection equipment. LaMarre said what followed was a years-long effort to engage with government officials at all levels.

“The Port of Monroe, on behalf of every port in the system, advocated with our legislators to ensure that U.S. Customs and Border Patrol regulations were being applied consistently and equitably throughout the system,” he said.

Developments since then include the U.S. Department of Transportation’s Maritime Administration naming the Port of Monroe in its M-90 Marine Highway route (2016), the University of Michigan conducting a study of the direct impacts CBP’s inspection policy had on the port (2019) and the Port of Monroe receiving a $770,000 port security grant from the Department of Homeland Security for a Radiation Portal Monitor (RPM) to screen cargo (2021). That port security grant came after U.S. Senator Gary Peters (D-Mich.), chair of the Senate Homeland Security and Governmental Affairs Committee, toured the port with representatives from CPB.

And momentum is continuing to build.

“We have a commitment from U.S. Customs to assist us in achieving x-ray scanning capability,” LaMarre said. “We’ve received $1.7 million from the city of Monroe. And just recently, for the very first time ever, a port was included in the state of Michigan’s budget. Our container project was put into the budget for $5 million in state support, which will all go toward building out what we’re calling Michigan’s Maritime Gateway.”

That gateway will be a fully functional facility, LaMarre said, capable of meeting all the requirements of both the 2006 SAFE Port Act and CBP.

“The facility we’re constructing will be roughly $6 million,” said LaMarre, who added that excludes the cost of the RPM and x-ray scanning equipment. “It will represent one of the most significant investments in our infrastructure in Monroe’s history.” 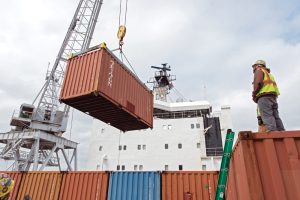 On the other side of the Soo Locks at the westernmost point of Lake Superior and the Great Lakes-St. Lawrence Seaway, the Port of Duluth-Superior has extended its land-based container trade at its Clure Public Marine Terminal to include marine transportation as well. The port, along with terminal operator Lake Superior Warehousing, which markets the terminal under the brand Duluth Cargo Connect, announced the added waterborne container-handling abilities about a year ago.

Like at Cleveland and Monroe, the addition of waterborne container transport at Duluth is building on existing business and success.

“The Port of Duluth-Superior anchors the western terminus of the Great Lakes-St. Lawrence Seaway system,” said Deb DeLuca, executive director of the Duluth Seaway Port Authority. “We’re the largest port on the Great Lakes by tonnage, and we’re among the top 20 in the nation, based on tonnage.”

With its nearness to the geographic center of the North American continent, Duluth-Superior is well-positioned for moving raw materials and finished goods in and out of the heartland, DeLuca said.

DeLuca said iron ore, used for steel production, is the top cargo at the port. Agricultural products are high on the port’s cargo list as well, with 80 percent of grains moved through Duluth-Superior bound for export. On average, cargoes moving through the port add up to about 35 million tons per year, and that business supports about 8,000 jobs.

The Clure Public Marine Terminal covers about 40 acres and connects to four Class I railroads. Besides its bulk and general cargoes, the port handles a lot of project cargoes like wind turbines and other power generation equipment.”

“Lots of high value, large, heavy pieces of freight that want to move by water all the way inland to get to their ultimate destination,” said Jonathan Lamb, president of Duluth Cargo Connect.
After the announcement last October of the capability to move containers by ship, the first container-laden vessel departed from the Clure Public Marine Terminal the last weekend in May. Building on one of Duluth-Superior’s strengths, the Spliethoff-chartered vessel Nunalik was carrying 200 containers loaded with 4,500 tons of kidney beans packed in super sacks.

“We operate an excellent multimodal transport facility at the Clure Terminal, but to develop this maritime container business, it takes more than that,” Lamb said at the time. “It takes the steamship line operators, customers, freight forwarders, truckers and third-party logistics providers. It takes everybody, all of them, coming together to make a deal like this work, and we’re very appreciative of everyone who helped make it happen.”

Reflecting on the growth potential of the waterborne container trade in the Great Lakes, Gutheil admitted there’s one key issue: seasonality.

“Frankly, I think, in order for container business on the Great Lakes to reach its maximum potential, we have to solve the seasonality issue,” Gutheil said. “There’s not going to be substantial container business—and by substantial, I would say more than 100,000 TEUs on an annual basis—until we’re a year-round system. There are a lot of cargo owners out there who just don’t want to move their containers in and out of the system for 9.5 months and then have to go find another solution for 2.5 months.”

Gutheil also said he thinks developing a feeder or shuttle container service, which would move boxes to and from larger ports like Montreal or Halifax to more western ports in the system, would open Great Lakes ports to Asian markets, which could drastically increase container volumes.

LaMarre said he envisions Great Lakes ports serving as, not just destination or origination points for international containers, but also redistribution points for those containers. Already, lakers move bulk and project cargoes between ports. Those same lakers could carry containers as well between ports in the system, LaMarre suggested.

With that kind of creativity, niche logistics solutions and determination, ports like Cleveland, Monroe and Duluth-Superior may actually be able to shift the paradigm of container shipping on the Great Lakes. 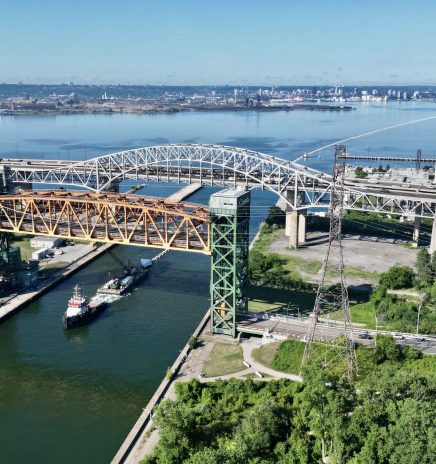 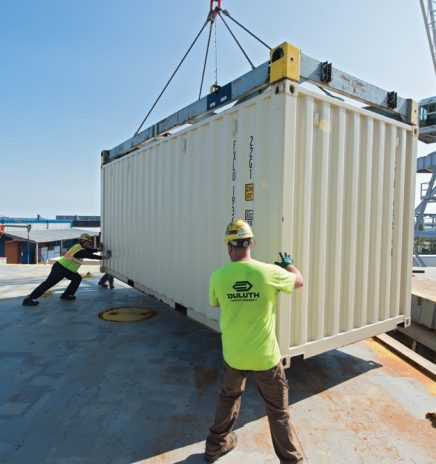 Historically, seaports have dominated the container scene, with boxes moved in and out of coastal ports on containerships and distributed inland by truck or rail. For the region surrounding the... Read More