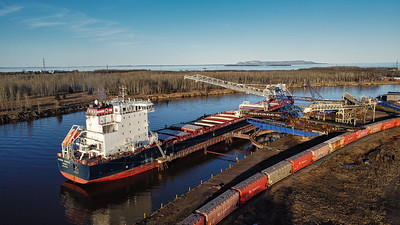 By GLSR Staff  |  November 16, 2022 Latest News
With a significant increase in grain shipments in October, monthly tonnage of this core commodity moving through the Great Lakes – St. Lawrence Seaway system continues to trend upwards. Just more than 1.3 million tons of Canadian grain was shipped in October, bringing the year-to-date total to more than 5.5 million tons.

“The positive trend for grain continues to show the important role the Seaway plays in supporting exports,” said Terence Bowles, president and CEO of the St. Lawrence Seaway Management Corporation. “We have also seen a significant increase in the number of vessel transits this year. It’s another indication of the vitality of marine shipping on the Great Lakes – St. Lawrence Seaway system linking the Great Lakes to the rest of the world.”

Overall shipping on the seaway system has now reached 27.6 million tons, a steady improvement over the past few months.

Through October, dry bulk shipments also remain strong. Potash is up 190% over last year, salt is up 22.3% and petcoke is running 18% ahead of 2021 year-to-date totals. Shipments of petroleum products have also been robust, showing a 37% increase over 2021.

At the Port of Thunder Bay, grain and potash shipments are leading the way with grain elevators handling 840,000 tons of wheat, canola, and other grains in October. That total is a 33% increase from September and up 8% over October 2021.

“The increase in grain shipments was expected as the fall grain harvest moves through the supply chain,” said Chris Heikkinen, Port of Thunder Bay director of business development & communications. “This really marks a return to a more typical volume of grain moving through the port following a down year in 2021.”

Meanwhile, potash shipments moved past 1 million tons in the Port of Thunder Bay this year, the most of this product transported in more than 30 years. Global supplies of potash, a key ingredient in fertilizer, have been strained by sanctions from Russia and Belarus.

The Port of Windsor reports that year-to-date overall tonnage is running 25% ahead of 2021 through October. “Local construction of large projects has provided a big boost to demand for aggregates, which are up 58% over last year,” said Steve Salmons, president & CEO of the Windsor Port Authority. “We expect the increase to continue with a million-ton delivery of aggregates for the foundation of the new EV plant before the end of the year.”

Windsor also reports an increase in salt shipments (+15%) in anticipation of solid demand this winter. Grain shipments have been on par with 2021 but are expected to increase significantly with this year’s harvest of a much larger crop, which is now underway.

At the Hamilton-Oshawa Port Authority, grain exports are fast approaching two million metric tonnes, which is 7% higher than the same month last year.

“Canadian farmers have an important role to play in delivering grain globally,” says Ian Hamilton, HOPA president and CEO. “We continue to be encouraged with a strong harvest across most of Ontario and we see evidence of that at our ports. The continued volatility due to the Ukrainian war and challenges with movement of grain in the US market, means grain producers in the province are well positioned to meet supply chain demand.” 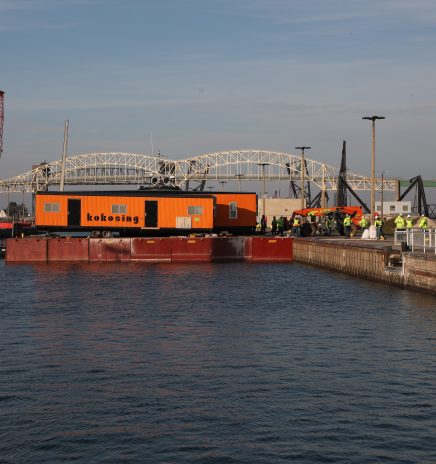